Are you still using a paper protocol?

While paper protocols are readily available and multiple options exist, there is a great deal of evidence-based data that indicates that computerized “insulin-dosing calculators” provide better patient care….less frequent hypoglycemia, enhanced compliance with fewer errors, less nursing time and workload, and better overall glycemic control. A 2006 study by Taylor, et. al, concluded that “Despite extensive in-servicing before implementation of the protocol and frequent feedback to the greater than 80-member nursing staff, protocol violations were identified a large portion of the days patients were on insulin infusions”.[1] Our own study of GlucoCare compared to a paper-based Yale protocol uncovered a substantial incidence of protocol deviations and errors that directly led to unwarranted hyper and hypoglycemia.[2] 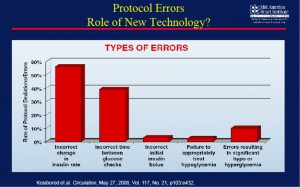